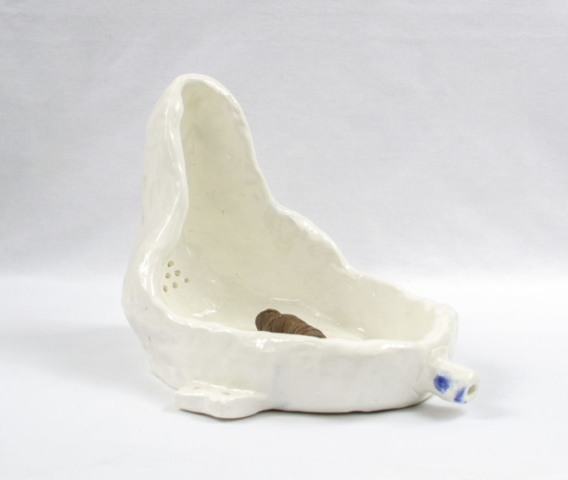 Note by Guest Juror Dorothy Santos
Despite not being able to feel the works in my hand, the cultural significance and mythology of each sculpture is made tactile and permanent. Each serves as an artifact of the inextricable link between consumerism and capitalism to identity and class. From his burial jars to high end perfume bottles, Del Rosario’s work provides the very representations we must be confronted with in order to deeply examine the purpose these objects serve. The breadth of his work shows his ability to lean into satire, parody, and performance, which I found both delightful and thought provoking.

Artist Statement
I work in an expanded ceramics field that combines objects and interactivity. Every project starts off in the ceramic form: from donuts to cigarettes to burial jars to cannabis, the objects I make are produced in multiples to enhance their abundance in a style full of inconsistencies in both the clay body and glaze application that reject mass production’s ideal quality.
These objects are then activated through social interaction and/or situations. The range of these projects includes a delicatessen where the public can purchase fake food for the price of the real thing, ceramic consumer craze items (such as toilet paper and images of Jesus on toast) put up on eBay to incite bidding wars, make- believe burial jars documented to mimic anthropological finds, displaying and selling ceramic garbage as fine art, and ceramic American imports sold on the streets of the Philippines. My work doesn’t seek to solve any issues; instead its mimicries, odd situations, and satirical performances prompt interactions and reflections from those that participate and even simply look.
Despite the breadth of the projects, there is a clear overarching theme in my work: renegotiating issues of identity through capitalism and consumer culture. These oh-so familiar objects are remnants from the failed American Dream, the leftovers of an overridden Philippine culture, the addictive items that slowly kill you, yet they are all so ingrained into an identity’s portrayal, history, and imagery. Through my work, I adopt many Western portrayals of businesses, occupations, and rituals and rewrite them as my own tragic and comedic version from the standpoint of an artist whose own culture has been dominated and erased by it already.